Kendra Greendeer, a member of the Ho-Chunk Nation and descendant of the Red Cliff and Fond du Lac Bands of Lake Superior Ojibwe, is a Ph.D. candidate in Art History with a focus on contemporary Native women artists, the transformation of spaces, and decolonial museum practices. Her recent curatorial and academic work encompasses Native American arts and the history of the United States. Most recently Kendra has curated and been the conservator for objects exhibited in Ho-Chunk Objects displayed in the permanent installation “Mrs. M’s Cabinet” at the Milwaukee Art Museum and in the co-curated exhibition Intersections: Indigenous Textiles of the Americas at the Ruth Davis Gallery on the University of Wisconsin–Madison campus. She is currently the Collections Manager for Little Eagle Arts Foundation in Wisconsin Dells, Wisconsin. She earned her B.F.A. in Museum Studies from the Institute of American Indian Arts in Santa Fe, New Mexico, and M.A. in Art and Museum Studies from Georgetown University in Washington, D.C. 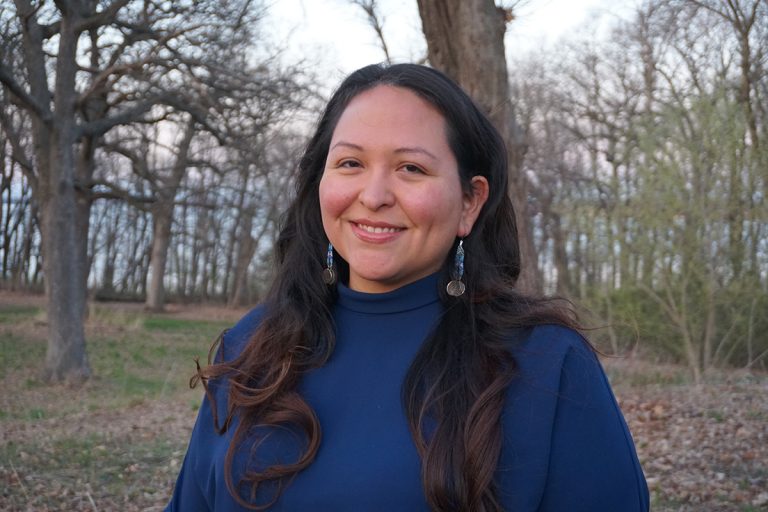 Madison, Wisconsin is a place filled with thousands of years of Indigenous history. Recently, there has been an increased interest in the Indigenous peoples of the area. As a Ho-Chunk woman and a University of Wisconsin–Madison student, I find myself skeptical of this sudden settler attention. I am often put in the position of being a token voice about Native issues on campus, and I’ve had my words quoted without the full context to serve other people’s stories. Some of this heightened interest is due to a new Our Shared Future commemorative marker, which acknowledges the violent history of Indigenous removal and settler occupation of Ho-Chunk land. It is essential that I share, in my own voice, how the land that the University of Wisconsin–Madison stands on carries memory of Native histories—and how settler methods of commemoration do not tell the only story.

The town of Teejop, pronounced day-jope, is Ho-Chunk for “Four Lakes” referring to the Lakes Mendota, Monona, Waubesa, and Kegonsa. When the place of Teejop, home to Ho-Chunk and a place where other Native peoples convened, was first visited by European Americans in 1829, three men from the Michigan Territory stood on a hill and “envisioned a bustling city.”1 In 1836, the Wisconsin Territory was established and the then unincorporated village of Madison was selected as the new capital. As public interpretive signs scattered around Capitol Square note, European settlement of the capital—and the University of Wisconsin–Madison—destroyed approximately 65 percent of the earthen mounds that once peppered the landscape of Dane County. What we see today is the result of removing ancestral monuments as Madison became a western city.

Although Native people have been a part of the Madison history, a European idea of land has allowed for an amnesia of history of the United States. In the white settler imagination, a built structure reinforces permanence and “ownership” of land. Following this settler logic, the effigy mounds of Teejop are the only acknowledged presence of Native history in the Madison area. If all the mounds had been leveled, it would have also erased what white Americans consider as land ownership. The fact that some mounds still exist forces individuals and institutions to acknowledge a history that could not be completely terminated.

The University of Wisconsin–Madison campus has recently begun to reckon with histories of settler-colonialism and the persistent presence of Native histories on the land it occupies, with much of this attention focused on the few effigy mounds that remain. In 1848, Wisconsin’s Territorial Legislature authorized the establishment of a university near the seat of the governor, and within two years the first UW building, North Hall, stood on Ho-Chunk land. In 1859, the construction of Main Hall (now Bascom) destroyed four known effigy mounds. When Agricultural Hall was constructed on Observatory Hill in 1902 to 1903, more mounds were lost. What is now known as the Observatory Hill Mound Group was finally listed in the National Register of Historic Places in 2003, and today more care is exercised to preserve its two remaining effigy mounds: the bird mound and a turtle effigy (now described as a “two-tailed water spirit”). The remaining effigy mounds are a constant reminder of Native histories. The mounds’ subtle integration in the landscape make them almost undetectable to passersby, so the plaques that mark the surviving landforms commemorate these histories—despite their relatively small size and unobtrusive placement on the ground.

The land remembers Native histories that aren’t as geographically obvious as the effigy mounds that escaped destruction. There are important stories that aren’t yet told by the monuments on campus, and there are stories that are still told exclusively from a settler perspective. One of the few markers that discusses Native American presence on the campus is the bronze plaque acknowledging the famous Sauk Chief, Black Hawk. Affixed to a small boulder located east of Carillon Tower, the monument reads:  “Black Hawk, Sauk Chief, retreated though these grounds July 21, 1832 pursued by militia and U.S. regulars.” Erected in 1913, this plaque re-tells a western version of the stories that surround Black Hawk’s legacy and fuel the 20th-century white American myth of a Native warrior. Moreover, the plaque sits so low to the ground the seasonal blooms that surround it often cover the text. This marker becomes more natural than prominent as students pass by, just as the regionally famous Black Hawk supposedly did.

In a similar way, the university’s iconic landmark, Bascom Hill, has long obscured Native histories. Bascom Hill was once a site of four known mounds but is now the place of one of the most prominent symbols of the University of Wisconsin—the statue of Abraham Lincoln.2 Because of his impact on Americans during his presidency from March 4, 1861 to April 14, 1865, the seated Lincoln rests on top of a pedestal. For a Native person in this portion of the United States, Lincoln is known for ordering the hanging of 38 Dakota warriors in Mankato, Minnesota on December 26, 1862 and the removal of Ho-Chunk from nearby Blue Earth, Minnesota as part of the 1863 Winnebago Removal Act, where Ho-Chunk lived after being removed from their native Wisconsin.

The statue of Abraham Lincoln is now meant to acknowledge the legislation that made it possible for the UW to grow. As the University of Wisconsin’s alumni website explains,  “Lincoln signed three acts during his presidency that hugely enhanced the quality of universities across America . . . one of the three was the Morrill Act, signed in 1862.” The Morrill Act, or also known as the Land Grant College Act of 1862, allowed for the University of Wisconsin to expand—but at what expense and for whom?

As the history of the United States has failed to highlight, when lands were viewed as “unclaimed” they were already a part of Indigenous territories. In 2017, the Indigenous student organization Wunk Sheek asked the university to add a plaque to the Lincoln statue to recognize his role in the deaths of the Dakota 38; the university did not fulfill their request. The students of Wunk Sheek also held a “die-in” demonstration at the statue to challenge perceptions of “great men” and “American heroes” that are not inclusive to all American people’s histories. In order to resolve this history, one must understand that land has memory. What may have made someone great elsewhere does not apply if a place could tell a different story.

As a Ho-Chunk tribal member and someone in my third year of graduate study at the University of Wisconsin–Madison, I acknowledge that this institution was not built with the intention of including me. These markers are not only poorly planned but feel like acts of insolence. The fact that this is Ho-Chunk land makes these acts all the more apparent. This space around us is my homeland, and there is no place that I can be closer to my origins than here. Yet this is all that I, and other tribal members, have been left with.

The Land Has Memory: How Unseen Histories Persist

A new land recognition plaque was installed June 18th, 2019 on Bascom Hill. The plaque acknowledges that the UW occupies Ho-Chunk land and has since the forced removal of Indigenous people from Teejop. It also affirms the current respect that UW has for the sovereignty of not only the Ho-Chunk Nation but also the other eleven other tribes of Wisconsin. This land recognition has been widely applauded by media outlets around Madison, Wisconsin, and certainly it is a welcome addition. While the university may claim this as a shared effort, it was only possible through the unseen emotional volunteer labor of the UW–Madison’s Indigenous faculty, staff, allies and Ho-Chunk community members, many of whom have spent years asking for meaningful acknowledgement of the Native histories on which the campus is built. Their labor should not go unmarked. Central to the story of Our Shared Future plaque is how they—we—continue to add new Indigenous histories to this land.

Students, faculty, staff, and visitors can see the newest addition to the collection of commemorative markers around campus—but only if they look carefully. Like the earthen mounds’ plaques, the Our Shared Future sign rests at a height one must bend over to read. On one hand, the unobtrusive placement of these visual acknowledgements signifies which histories are visible and valued on campus and which might disappear from view beneath snow drifts and flower beds; the Lincoln statue on Bascom Hill, for example, is never hard to miss.

But on the other hand, you need to get closer to land in order to read about the earthen structures, Ho-Chunk removal, and ongoing settler occupation. Physically closer to the earth is where these ideas and words are placed, and closer to earth is where every human needs to strive to be. The values of a university and most of western society depend on physical hierarchies, but this also creates more distance from what matters in terms of being a human being. Our markers are kept on the ground, not raised on a pedestal. Indigenous people don’t need to create a distance from the place that provides, created, and nurtured us—the land.